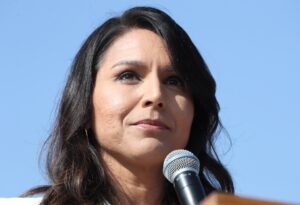 Democratic presidential candidate U.S. Rep. Tulsi Gabbard (D-HI) speaks during the inaugural Veterans Day L.A. event held outside of the Los Angeles Memorial Coliseum on November 11, 2019 in Los Angeles, California. The stadium’s historic torch was lit at the ceremony to mark the anniversary of the armistice which ended World War I in 1918. Gabbard is the first female combat veteran to run for the U.S. presidency. (Photo by Mario Tama/Getty Images)

Throughout this decade, cannabis policy reform has evolved from being considered political suicide to a political liability if a political candidate doesn’t support legalization.

Gallup, which has conducted the same poll since 1969, is not the only poll that has found record support for legalization. Recent polls conducted by PRRI and the Pew Research Center found that 67% of poll participants support legalization.

It’s difficult to find another political issue that is supported by two-thirds of voters, especially in these divisive times.

When a candidate used to oppose cannabis reform, but has since ‘evolved’ on the issue, how can voters know that they are sincere?

Clearly not every politician should be taken at their word when it comes to supporting cannabis. If Jeff Sessions or Chris Christie all of a sudden ‘evolved’ on cannabis policy and supported legalization, would they come out as believable? Of course not, so clearly there’s a standard.

Presidential candidate Tulsi Gabbard recently offered advice on this topic in a recent interview with the International Cannabis Business Conference (ICBC). Gabbard will be appearing live via Skype from the campaign trail during the upcoming ICBC in San Francisco in February.

“Cannabis reform is very popular now, however, that was obviously not always the case. As with any political issue, candidates need to be allowed to evolve when it comes to their stance on cannabis policy,” Congresswoman Gabbard pointed out in an interview with ICBC.

“If someone used to be opposed to cannabis reform and now sincerely wants to get on the right side of history and support reform, they should be able to do so. However, that needs to be balanced against candidates on the campaign trail that are not truly sincere in their beliefs,” Gabbard went on to say.

Sincerity, or lack thereof, became a topic of debate in July during the televised Democrat presidential debate when Tulsi Gabbard called out fellow candidate Senator Kamala Harris for her record as a prosecutor in California.

“Now, Senator Harris says she’s proud of her record as a prosecutor and that she’ll be a prosecutor president. But I’m deeply concerned about this record. There are too many examples to cite but she put over 1,500 people in jail for marijuana violations and then laughed about it when she was asked if she ever smoked marijuana.” Gabbard stated at the time.

It is worth noting that Kamala Harris has introduced cannabis reform legislation into Congress. However, it’s also worth pointing out that Harris refers to the ongoing War on Drugs in the past tense, even though someone is arrested for cannabis in the U.S. every 48 seconds.

Earlier this year Senator Harris recalled her use of cannabis in college, stating that at the time she was consuming cannabis while listening to Tupac and Snoop Dogg.

Unfortunately for Senator Harris, who graduated from law school in 1989, Tupac’s first released verse did not occur until 1991 (Same Song, with Digital Underground) and Snoop did not debut until 1992 (Deep Cover, with Dr. Dre).

The only way that Kamala’s story squares up is if either she had mixtapes by those artists that no one else had at the time, or she took some continuing education courses in the early 1990s, both of which seem unlikely.

Voters are justified in being skeptical of a candidate’s evolution on cannabis policy when they have Senator Harris’ track record.

Another 2020 candidate has experienced issues regarding their level of sincerity for cannabis reform.

Former Vice President Joe Biden recently reiterated that he opposes adult-use cannabis legalization at the federal level and made the claim that cannabis is a gateway drug, a claim which was debunked long ago.

After receiving a tremendous amount of backlash over his ridiculous view on legalization, Biden tweeted that he is in support of cannabis decriminalization.

A decade ago that may have been considered by voters to be a progressive cannabis policy, however, in 2019 that view puts Joe Biden well into the minority regarding support on the issue.

“When a candidate was anti-cannabis for a long time, and only changed their stance after polling on the issue became favorable, voters should obviously be skeptical,” Gabbard added. “Voters should seek out information to see what the newly-supportive candidate has done to introduce and/or promote cannabis reform legislation.”

That advice is useful when assessing political candidates at all levels of government.

If cannabis policy is going to improve in a meaningful way in the United States, it is vital that voters elect lawmakers that are going to actually push for reform while they are in office.

Obviously, there are other important issues to consider when voting for someone, however, voters have to be mindful and reward sincere candidates with their votes. Otherwise the status quo will remain.