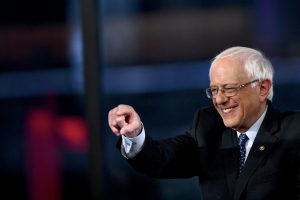 Almost every candidate involved in the Democratic presidential primary election believes in reforming federal cannabis laws, but only Bernie Sanders plans to go further than simply allowing use and possession.

According to his plan, Sanders says he will legalize marijuana within the first 100 days of his presidency under the following key points:

American anti-drug laws have “disproportionately targeted people of color and ruined the lives of millions of Americans,” Sanders said in a statement. “When we’re in the White House, we’re going to end the greed and corruption of the big corporations and make sure that Americans hit hardest by the war on drugs will be the first to benefit from legalization.”

Another component would keep out existing companies that sell tobacco and cigarettes, along with those “that have created cancer-causing products or (are) guilty of deceptive marketing” by locking them out from the legal cannabis market.

Instead, the plan would give incentive to marijuana growers and distributors who choose to start non-profit or community co-op businesses that would benefit local economies.

“With the exception of Joe Biden, all of the leading Democratic candidates for President support legalizing marijuana,” said Violet Cavendish, spokesperson for the Marijuana Policy Project, to Rolling Stone. “Bernie Sanders has set himself apart from the field by proposing the most detailed plan we’ve seen from any candidate during this primary campaign.”