Marijuana is recreationally legal in California but still carries an “only for stoners” stigma in some circles. Maybe not for long.

On a recent Friday night, a San Francisco real estate agent invited two dozen friends to her home for a happy hour featuring alcohol-free cocktails laced with pomegranate seeds and cannabis-infused tea — not to get high, but to get highly educated about cannabis and its potential for health, wellness and, yes, even the giggles.

Cannabis socials are the hottest new social trend for those who’ve been afraid to try it, are confused about it or are unwilling to walk into a dispensary. The tutelage was courtesy of Amanda Jones and Jennifer Chapin, founders of Kikoko tea, whose teabags carry specific doses. The class consisted of a few men and lots of women, who ranged in age from their 30s to their 50s, many of whom were initially skeptical but left impressed. (The hostess, Shelly, asked that her last name not be used, for privacy reasons.) 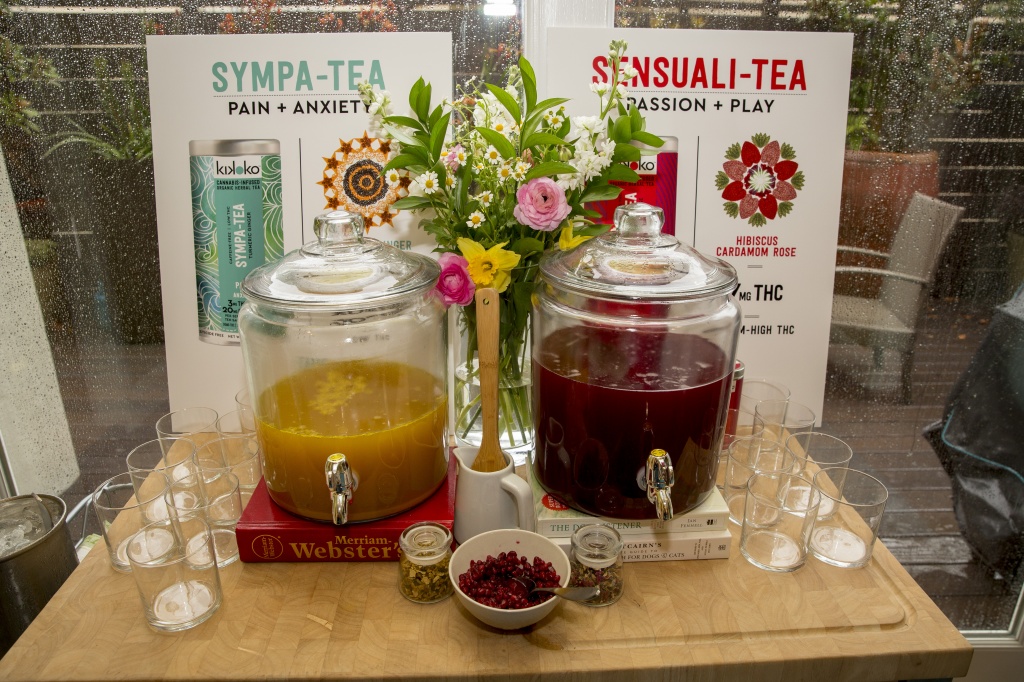 Two types of Kikoko cannabis-infused tea were served, along with information about dosage of THC and CBD, at a recent cannabis social. | Photo by Santiago Mejia, San Francisco Chronicle

“A lot of the education here tonight is not just in the presentation, but seeing people I know who are just like me,” said Ann, a trim, blond-haired, 32-year-old tech marketer clad in black who declined to give her last name. “Everybody here is totally normal. They’re productive members of society.”

Such get-togethers, now occurring at birthday parties, bridal showers and book club nights, are especially popular among women, with women-led cannabis companies at the forefront. They include Garden Society, a Santa Rosa firm that makes low-dose cannabis confections; Octavia Wellness, a San Francisco cannabis brand that focuses on seniors; the North Bay’s Casually Baked, led by consultant Johanna Nuding, providing one-on-ones and sessions with parents and teens; and HerbaBuena, a maker that hosts social clubs and epicurean dinners with chats about cannabis for sleep, breast cancer and sexuality.

Like many such tutorials, Kikoko’s 10-minute lesson touched on cannabis’ medicinal history, which dates back thousands of years in China, and touched on the studies and clinical trials by researchers in countries outside the U.S. that show cannabis is effective in providing relief for pain, anxiety, sleep disorders and more. (Studies are more difficult in the U.S., where the federal government lists cannabis as an illegal Schedule 1 narcotic.)

Guests learned the difference between the two types of cannabis — sativa (stimulating) and indica (which leaves users feeling idle, or “in da couch”). They learned the difference between THC (tetrahydroacannabinol) which has euphoric properties, and CBD (cannabidiol), which has anti-anxiety and anti-inflammatory properties, but is not psychoactive. They also learned it can be smoked, vaped, eaten and used in liquid formats. 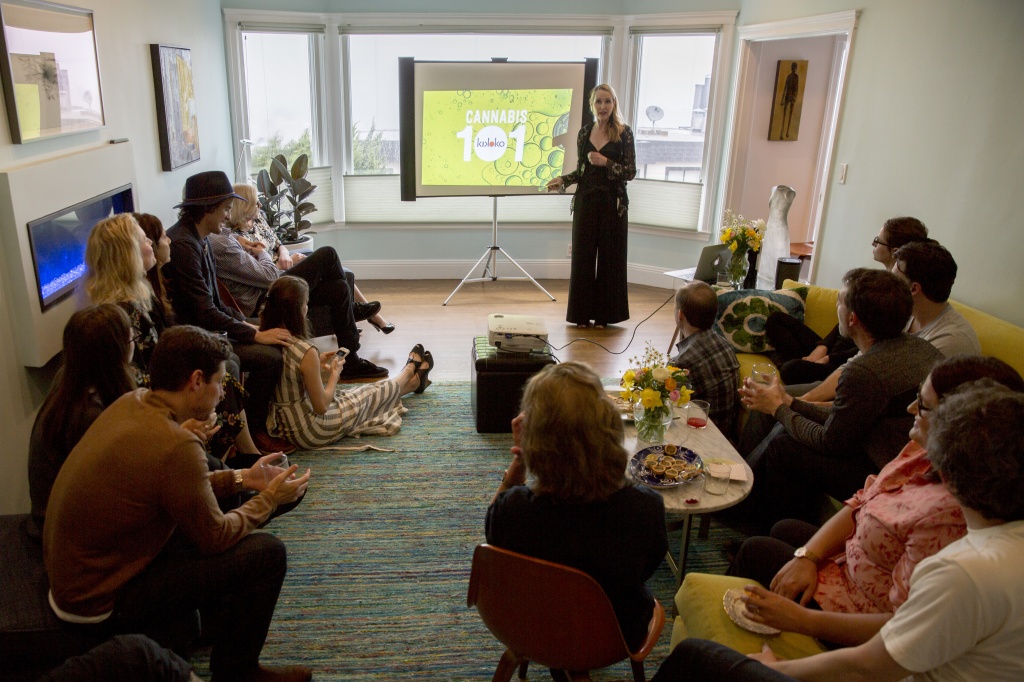 Part of the educational rush stems from the fact that although Proposition 64, which allowed for recreational use by adults 21 and over, was approved by voters in 2016, it took more than a year for state laws and licensing to be phased in. The commercial sale of cannabis, without a medical recommendation, began on Jan. 1 of this year. Consumers are now trying to understand what’s available over the counter.

As a result, demand for cannabis socials has surged. At HerbaBuena, founder Alicia Rose said she’d already fielded requests for 20 parties in the first three months of this year — about as many as she conducted in all of 2017. 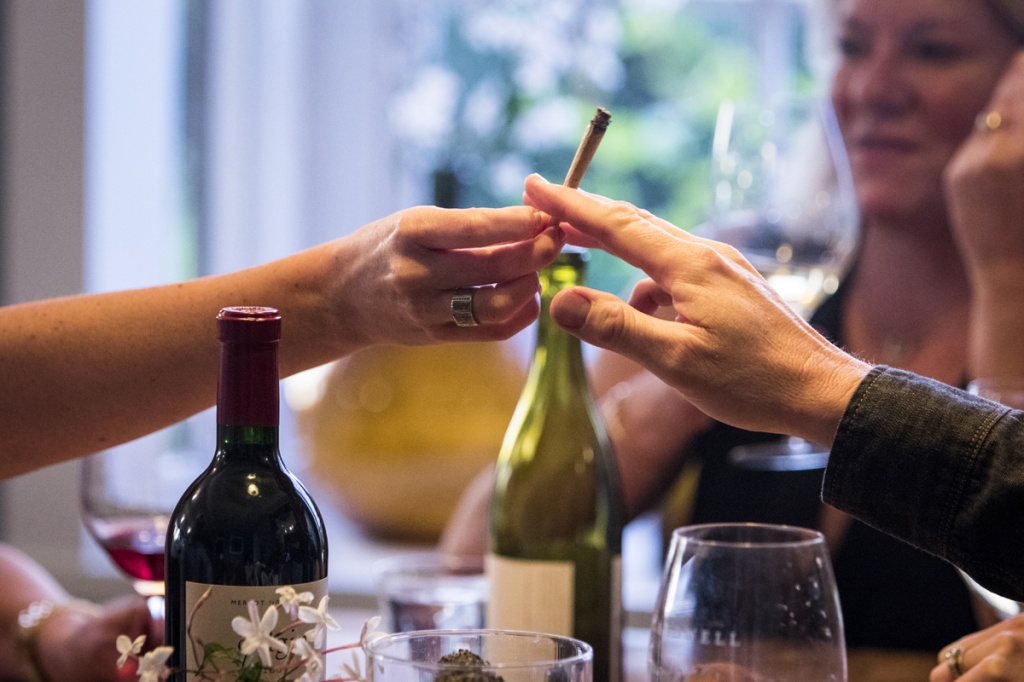 Kikoko, popular for its frilly “high tea” events with china tea cups, hats and gloves, has educated 500 women at 27 weekend teas since it launched in June 2017. Demand for tea parties has climbed in recent weeks, after being featured in a seven-page spread in O, the Oprah Magazine.

But the company can’t be everywhere, so it has created a “Throw Your Own High Tea” guide on its website with information to download and print out about dosage and potency, along with recipes for cannabis tea mocktails. Pushing the parties onto private hosts is also a way for Kikoko (and other companies) to comply with the law. As of Jan. 1, cannabis manufacturers are no longer able to host parties and give away or sell cannabis on site. Private citizens can host and buypurchase cannabis ahead of time to provide for their guests to try, as Sutherland did at her mixer. Guests may also bring their own cannabis to a private party. (Consumption is not allowed in restaurants, wineries or venues with firearms licenses.) 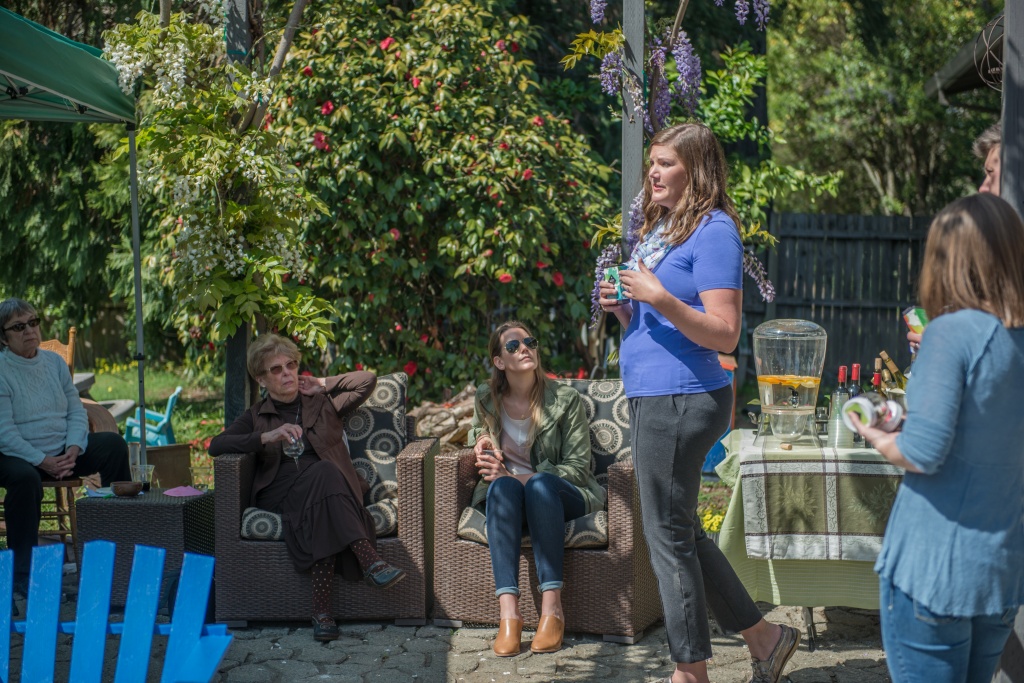 At a recent party in Healdsburg, Garden Society’s Erin Gore led a discussion about cannabis and its uses for pain, stress and sleep. | Photo by Cynthia Glassell

The boom in cannabis education in California, especially about cannabis for health, reflects a national trend toward “purposeful consumption,” said Linda Gilbert, managing director of consumer insights for BDS Analytics, a Boulder, Colo., cannabis market data, analytics and consumer insights firm. Its surveys of 11,600 U.S. adults ages 21 and over show that in general, women — and mothers in particular — favor micro-dose products for daytime use, not for inebriation, but “to take the edge off,” Gilbert said, and prefer edibles, which are more discreet than smoking or vaping. BDS data shows that California cannabis consumers earns $93,800 a year on average; that 20 percent hold master’s degrees; and that 64 percent have children. 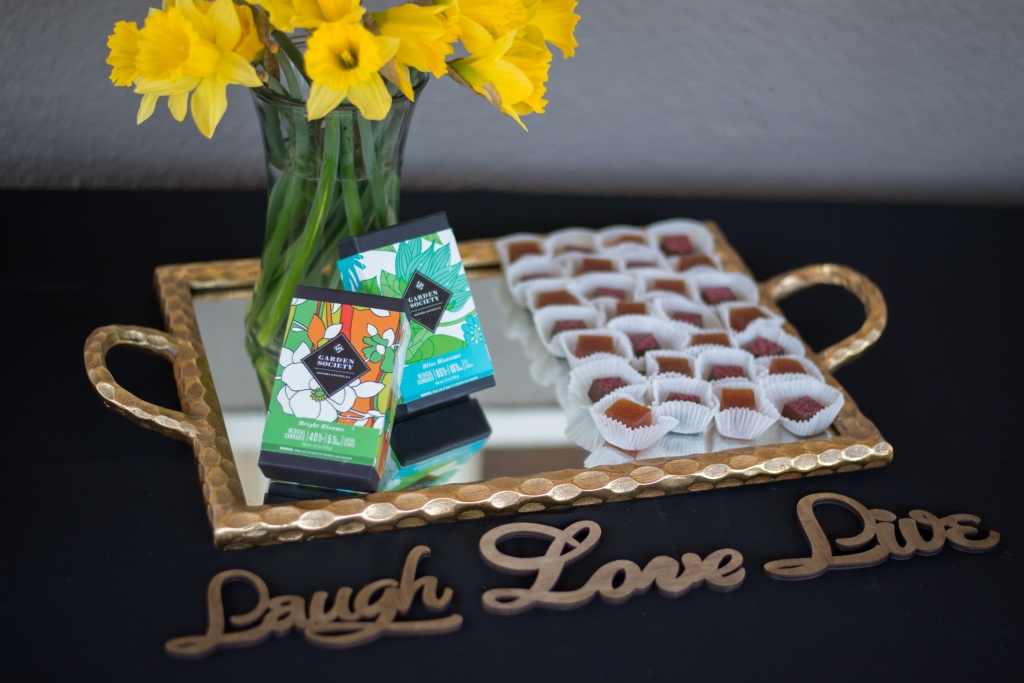 Garden Society, a maker of cannabis-infused confections, displayed its wares (for show, not for consumption) at a recent social in Healdsburg. | Photo by Cynthia Glassell

That was the lesson at the recent happy hour party, where guests were told to control the amount of THC or CBD they ingested by the rate at which they sipped their tea. Guests also felt a sense of trust — not just in the friend who was hosting, but in the information dispensed by Kikoko’s founders.

“It’s more intimidating to walk into a dispensary than your friend’s house,” said Ann, the tech marketer, sipping a cup of CBD-infused tea. “This feels the same as if she was having a regular wine party.”

This story has been updated since it was originally published because it contained information that should not have been included.