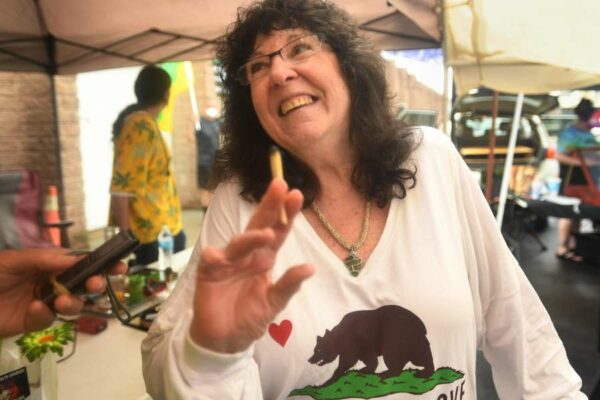 HAMDEN – Connecticut’s marijuana underground on Thursday stepped into the open, breathed a collective sigh of relief – along with some psycho-active smoke and vapor – and brought an early Independence Day feeling to the first day of adult-use cannabis.

For the 150 or so people hunkered under tents on a Treadwell Street parking lot, deep in an industrial zone, it was a mid-afternoon, open-consumption party to celebrate the multi-year fight for the full legalization of the simple, controversial, politically charged weed that nearly fell short of passage last month in the General Assembly.

“I never thought I would see this day,” said Dale Sheehan of Wallingford, 66, smiling, taking a puff on a pre-rolled joint, standing, out of the rain, among display tables of pipes and T-shirts for sale. “I really can’t believe this.” She recalled growing up on the New Jersey Shore. “It was there, but you never could you do it without anybody giving you the look or getting mad at you.”

Now, Sheehan is looking forward to being able to buy cannabis sometime next year, maybe at a corner dispensary in her neighborhood.

Since it’s still illegal to sell marijuana, people at the cannabis bazaar were giving it away in all its various forms. There were big jars full of dried marijuana flowers. There were bags of brown-wrapped pre-rolls and small jars of processed essence of the flowers. Nearly everyone had one kind of cannabis delivery system in their hands or nearby. Mostly, they were enjoying the historic legislative victory that ended an era of prohibition reminiscent of what might have been a similar popular sentiment in 1933, when the 14-year prohibition of alcohol finally ended after a failure of enforcement and a rise in criminal syndicates.

Christina Eva from East Windsor, was walking around with a tray of colorful cupcakes, each infused with 5 milligrams of THC, the active ingredient in what cannabis imbibers call the introspective, euphoric effects of the drug. “I made them from whole plant material, with a lot of love,” she said. “I’m very happy.”

Eva believes that what finally brought the issue to successful votes in the General Assembly – after Gov. Ned Lamont threatened a veto of an earlier bill – was the desire to reap the revenue bleeding into Massachusetts by Connecticut residents who drive there to buy legal cannabis. “They also needed to fix some of the wrongs that have been caused,” she said. “People are really starting to see things more clearly during these trying times. I think it’s given people a different perspective, you know?”

Eva, 37, declared that cannabis is safer than booze and can actually help people stop abusing alcohol. “This may be a safer alternative for them,” she said. “My biggest concern is to see towns that are now banning or threatening to ban the retail sale of cannabis that are selling alcohol on every corner at 9 a.m. And alcohol perpetuates addiction and disease and death and it really is a catalyst for family issues and life issues and illness.”

Joseph Raymond of Hamden, a longtime cannabis activist and founder of the New England Craft Cannabis Alliance, whose office is on the western edge of the parking lot, was passing out bright-green wristbands for those over-21, who as of 12:01 a.m. Thursday are allowed to partake of the drug and possess up to 6.5 ounces, with five ounces locked away inside a car or home.

“I always knew that it would happen,” Joseph, 39, said from under the brim of a big straw hat. “I did think there was a 10-year timeline to it and that’s when I started advocating, around 2012.”

In particular, he and other groups including the Canna Warriors, pushed for a home-grow provision, which won’t take effect until October of 2023. Also important are social equity requirements so communities disparately impacted by the failed war on drugs, such as the neighborhoods adjacent to nearby Dixwell Avenue south into New Haven, can get a hand up and into the new cannabis industry, Joseph said.

He wants the privately owned parking lot to become a center of the counter-culture, since many public spaces will be off-limits to cannabis users. “We kind of look at it as international waters for cannabis,” he said. The party was attended by a variety of Connecticut-based cannabis influencers including Dab Punk 710 and Stoked Smoke Shop from Bridgeport.

“I would make July 1 ‘stoner independence day’ from now on in Connecticut,” Raymond joked, then stressed the need to consume the drug responsibly. He wants to reach out and shift his advocacy to consumer awareness.

Under another tent, Paul Kirchberg of Milford, executive director of the state chapter of the National Organization for the Reform of Marijuana Laws, was offering free celebratory inhalations of dab concentrate in an electric pipe. An expert in the state’s medical marijuana program, which this week has 54,143 patients enrolled, Kirchberg was enjoying the moment. “I’ve been advocating for six years, and it still seems surreal,” he said. “It’s exciting. I really do see the future of cannabis in Connecticut being fruitful.”

Nearby, Timothy Doherty of East Norwalk, 52, a medical marijuana patient, was talking about the efficacy of inhaling the vapors of concentrates, which eliminates much of the harshness and potential carcinogens found in smoking.

“I was praying for this since 2016, when I first became involved as a patient,” Doherty said. “It helped me get sober. It got me off of pain killers. For me, this day is finally here and I’m really happy.”

Cody Roberts, 29, of Seymour, said he started the Canna Warriors this year to inspire a bottom-up strategy to illustrate to the General Assembly that there was a wave of support. The most high-profile tactic was the $3,000 raised for a billboard supporting full legalization. “It was pretty good, dude,” he said of the campaign, then showed off a small jar of concentrated hash rosin, formed by ice and water and heat pressure through micron screens. “We had a good run.”

The rain had very little effect on the sharing of joints, bong hits, dabs of concentrated cannabis flower essence and baked goods on display on the tables among revelers, as Connecticut joined Virginia, New York and New Mexico in the latest round of states to legalize it. Nineteen states in all have approved adult-use cannabis.

At around 3:30, as more and more celebrants parked in the lot and joined the festivities, the sun finally came out.

Earlier on Thursday, in a virtual news conference, officials from the Marijuana Policy Project noted the new legalization landscape. DeVaughn Ward, who was the project’s Connecticut lobbyist, highlighted that the new law requires 50 percent of licenses to eventually grow and dispense cannabis will go to equity applicants from neighborhoods adversely affected by the multi-generational drug war; and that 60 percent of revenues will eventually go there as well.

Police, he said, can no longer stop motorists just because they may smell marijuana. Karen O’Keefe, a veteran of the multi-year campaign in Connecticut who is now the Marijuana Policy Project’s director of state policies, said that other states should heed the will of voters.

“It’s past time that every state in the country and the federal government replace marijuana prohibition with equitable legalization and regulation,” O’Keefe said. 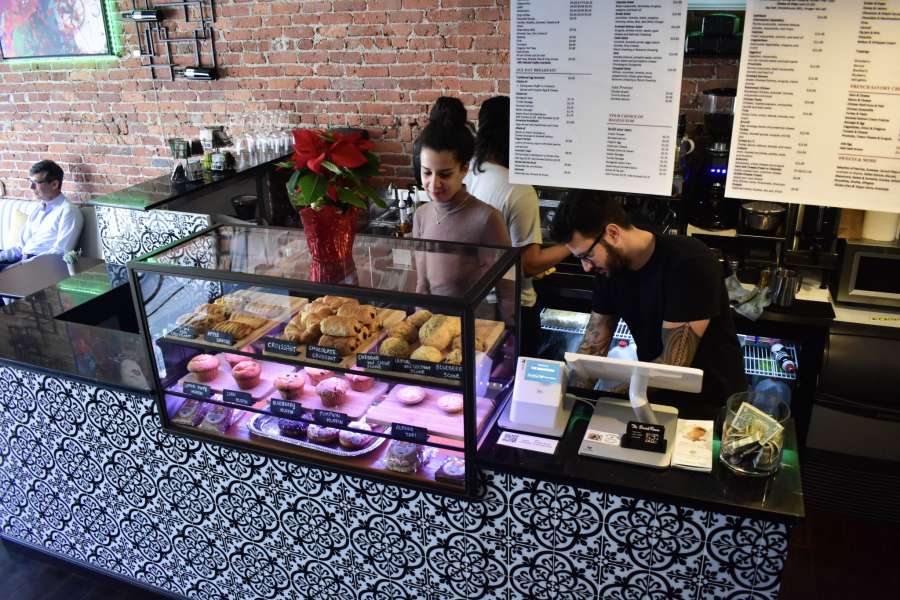 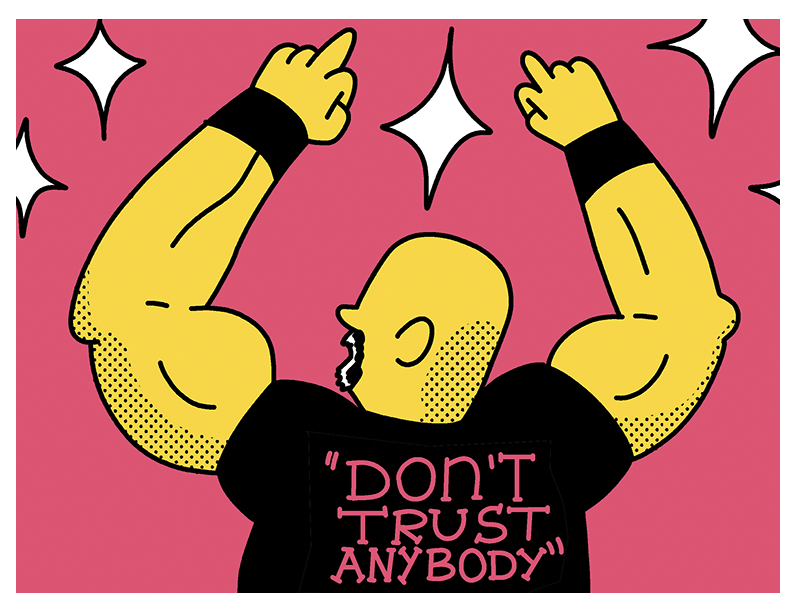