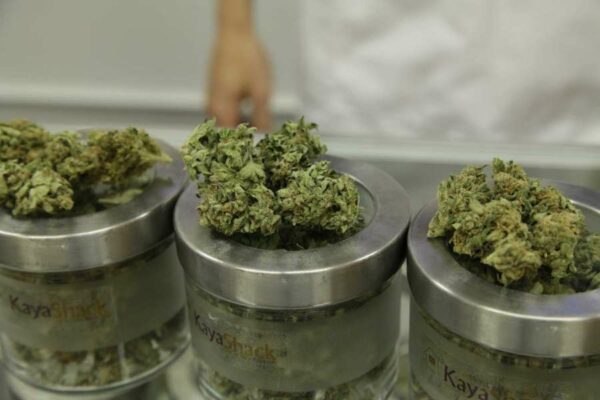 HARTFORD – Democratic leaders of the state House of Representatives Wednesday stripped out a controversial Senate amendment on legalizing marijuana, then led approval of the recreational cannabis bill endorsed by Gov. Ned Lamont.

The bill passed 76-62 after seven-and-a-half-hour debate, sending it back to the Senate Thursday for final action. A dozen Democrats voted against the legislation and one Republican, Rep. Rich Hayes, of Putnam, voted for it.

House Majority Leader Jason Rojas, one of the key negotiators in the compromise bill, which will legalize possession of up to one-and-a-half ounces for adults 21 and over on July 1, said many lawmakers in recent years came around to support the measure. It would make Connecticut the 19th state to approve adult-use cannabis.

Undoing past injustices has driven Connecticut’s long effort for legal, recreational marijuana to the edge of approval. The bill would give preference for cannabis business licenses to people who grew up or have lived as adults in targeted, disadvantged neighborhoods; and it would strongly favor labor unions trying to organoze workers, among other equity measures.

Rojas recalled that long after the federal government outlawed marijuana in 1937, the campaign against cannabis was exacerbated by President Richard Nixon’s war on drugs starting in 1971.

That entangled whole generations of people who were tainted and whose lives ruined in the criminal justice and incarceration system.

“That impact on people has been disproportionately borne by low-income people, people of color, of those who live in urban areas and those who simply could not afford legal counsel,” Rojas said shortly before the 9 o’clock vote. “It is clear that where you lived, where you consumed cannabis, your income, the impact of your involvement with cannabis resulted in a disparate treatment resulting in negative consequences for not only the individual, but their families and entire communities.”

Among Democrats who voted against the measure were Rep. Andrew Baker of Bridgeport; Rep. Dan Fox of Stamford; Rep. Christine Goupil of Clinton; Rep. Mary Mushinsky of Wallingford; and Rep. Michelle Cook of Torrington.

An ambitious rollout schedule could have retail cannabis available by May of next year if, as expected, the Senate adopts the House version and Lamont signs it.

The vote took on added drama 24 hours earlier, on Tuesday night, when Sen. Gary Winfield, D-New Haven, offered an amendment in the middle of the debate in the Senate. The measure, which passed, would expand eligibility for preference on license to people who had previous cannabis convictions, from throughout the state.

That broke what was a handshake agreement among Lamont and proponents, including Democratic leaders and the Black and Puerto Rican Caucus. Winfield made the move at the request of another New Haven lawmaker, state Rep. Robyn Porter.

“I’ve never seen anything like that before,” said state Rep. Juan Candelaria, D-New Haven, a longtime proponent for legal cannabis who said he was stunned by the 11th-hour Senate amendment that threatened months of work. “We had a deal,” he said in an early afternoon interview on the House floor.

After a long meeting of House Democrats, Rojas and House Speaker Matt Ritter said that rather than court a promised veto from Lamont, House members would amend the Senate bill and reinsert the original language from last week.

While the House agreed unanimously to take out Tuesday’s Senate amendments, the long-awaited, multihour debate and vote on adult-use cannabis sharply divided the chamber, which Democrats control 97-54. A initial Republican amendment failed 82-52 around 5 p.m., with 16 lawmakers missing one a week after the end of the regular legislative session.

Rojas said while at the committee level, majority Democrats approved legislation to allow those convicted of drug crimes to become eligible for licenses, he described the deletion of the proposal an example of the negotiation process with Lamont’s office.

The measure to favor people convicted of marijuana crimes had been approved by Democrats in a committee, but Rojas said the negotiated deal carried the day. Lamont, who gave ground to Democratic legislators on several key bills, insisted that so-called social-equity candidates for licenses come from lower-income neighborhoods that had been targets of the failed war on drugs.

‘We fought a Civil War over this’

The House debate began shortly after 1:30 p.m, when Rep. Steve Stafstrom, D-Bridgeport, co-chairman of the Judiciary Committee, introduced the bill, which he described as the product of as many as nine years of negotiations.

Quickly, the House unanimously approved stripping out the two Senate amendments, then voted unanimously to restore an anti-revolving door policy to ban members of the General Assembly from participating in the adult-use cannabis market for two years after leaving office.

Rep. Craig Fishbein, R-Wallingford, the top Republican on the Judiciary Committee, said legalizing marijuana could violate his oath of office to uphold the United States Constitution. “It appears to me that we fought a Civil War over this,” Fishbein. “We’re saying to the federal government that we don’t care you passed a law. That’s a troublesome position to be in.”

While federal law still bans marijuana, in recent years the U.S. Justice Department has issued notices that it would not interfere with states that legalize marijuana.

“Does anybody here think that if we pass this legislation, the commercialization of pot won’t hurt our youth?” asked Rep. Tom O’Dea, R-New Canaan. “We’re turning marijuana into Big Tobacco. The addiction-for-profit industries addict the most vulnerable.” O’Dea’s amendment would have raised the age from 21 to 25. It failed 82 to 52.

Stafstrom suggested that O’Dea pursue a higher-age law next year, and possibly expand it to include the purchase of alcoholic beverages and cigarettes.

“I’ve been sitting on the fence so long I have splinters,” admitted Rep. Jonathan Steinberg, D-Westport, co-chairman of the Public Health Committee. “I’ve come a long ways,” he said, stressing that potency guidelines in the current bill are too high. “I think the most important part of this is we’re creating a regulatory environment.”

Steinberg also praised the bill’s dedicated revenue stream for mental health programs and public awareness, but was critical of the eventual allowance of home-growing on July 1, 2023. Steinberg introduced an amendment to eliminate home-growing from the bill.

“We can’t wipe out the black market, but we can do everything we can to create a responsible market in Connecticut,” Steinberg said. After a brief debate, he withdrew the amendment, however.

State Rep. David Rutigliano, R-Trumbull, who owns several restaurants, said he has seen young employees use the drug over a number of years. He spoke in favor of a third GOP amendment that would have limited the bill to home-growing, similarly to the way Vermont first approved the issue in 2018. That proposal was rejected 114-21.

“I have no question in my mind that this is a mistake for the state of Connecticut,” House Minority Leader Vincent Candelora, R-North Branford. “I hope that we don’t regret this decision but I think we will.”

The state has an opportunity to build a new industry “literally from the ground up,” Rep. Anne Hughes, D-Easton, said, while giving opportunity to people in neighborhoods that had been longtime targets in the war on drugs.

People with past lower-level drug-possession arrests, under four ounces of cannabis, could have their records expunged under the bill.

The program would be administered by the state Department of Consumer Protection and a new Social Equity Council, a politically appointed group responsible for supervising 65 percent of tax revenue, estimated to exceed $73 million by the end of the 2025-26 budget year.

The state’s four medical marijuana growers could get into the adult-use business by paying $3 million each. “Frankly we wanted to charge an amount significant enough,” said Rep. Michael D’Agostino, D-Hamden, co-chairman of the General Law Committee, which was involved in the drafting of legislation in recent years.

US Virgin Islands authorizes recreational use of marijuana