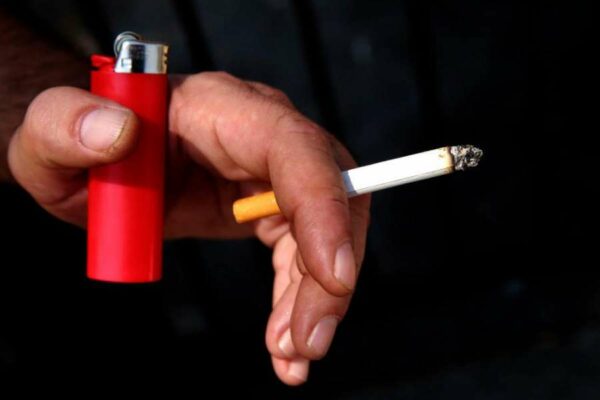 It’s common sight in cities and towns across Connecticut and the world: People outside of restaurants, stores or government buildings, puffing on cigarettes, or smoking as they walk along a downtown sidewalk.

Common, but all of that will become illegal in Connecticut on Oct. 1. Gone will be guest rooms in hotels and motels where smoking is allowed; no designated smoking lounges in workplaces, period; and no smoking in prisons or psychiatric facilities.

We all know smoking isn’t allowed in publicly owned or leased buildings, and food stores and restaurants. Starting Oct. 1, that ban extends outside, to 25 feet from any door, “operable” window or any air intake vent. And that outdoor buffer will also apply to all retail establishments, meaning you won’t be able to walk down the sidewalk of any downtown Main Street while smoking.

The new prohibitions apply to vaping, too. It’s all part of a new bill adopted by the legislature, which Gov. Ned Lamont is about to sign into law.

You don’t recall the debate? That’s because it didn’t happen. The stricter cigarette smoking rules were baked into the new marijuana legalization law, 295 pages long. And of course, they all apply to smoking or vaping marijuana.

Lawmakers and Lamont agreed on the sweeping restrictions from the start, with little if any dissent. They had two goals in mind: First, they wanted to restrict where people in Connecticut could smoke marijuana. Yes, possession and private consumption of pot becomes legal for anyone 21 or older on July 1, but that doesn’t mean it’s a smart idea to let six friends to fire up joints right outside the door of a restaurant or a town hall.

Restricting marijuana, in practical reality, meant restricting all smoking. After all, the reasoning goes, it will be hard enough to police public marijuana smoking without having to sort out what it is that’s being smoked.

And secondly, as Rep. Michael D’Agostino, D-Hamden, told me, “Those were updates that were going to be made regardless of whether we did cannabis.”

Connecticut’s Clean Air Act keeps a lid of second-hand smoke, so it made sense to write the reforms to that law into the cannabis legislation because the Clean Air Act had to include cannabis anyway.

“I’m good with that,” Lamont said when I asked him about the strict new smoking rules that will take effect in the fall.

Most people agree. In fact, as common as cigarettes remain in Connecticut – they will raise nearly $350 million this year at $3.90 a pack in excise taxes – smoking in public isn’t nearly as common as it was a few years ago. “Most restaurants have really gone away from allowing smoking at all,” said Scott Dolch, president of the Connecticut Restaurant Association.

He was talking about outside dining areas, where it’s still allowed, with restrictions. The new law tightens those up even more.

It was a festive night at the Old Post Tavern in Fairfield Center on Monday, as music filled the outdoor dining area, part of a townwide evening of live music. I told Carol Carbin, a local teacher, about the new rules as we arrived at the same time. She doesn’t smoke but sometimes vapes.

“I don’t like it, but maybe it will make me quit,” Carbin said, giving the answer public health officials had in mind when the state added the new restrictions.

Inside, owner Patrick Tennaro said he’s just fine with the new rules. He already doesn’t allow smoking at the outside tables; the town owns that part of the property. Some patrons step out to the sidewalk for a smoke – which will become illegal on Oct. 1.

“I’ll have less cigarette butts I’ll have to clean up,” said Tennaro, who’s clearly a very hands-on owner, as I also saw him busing tables.

The ban on smoking along sidewalks outside of establishments raises a question. “How am I as a restaurateur supposed to police this?” Tennaro asked.

The answer is, he’s not. That, said D’Agostino, co-chairman of the legislature’s General Law Committee, a strong supporter of cannabis legalization, will be up to the towns, which control the sidewalks.

Two smokers and their friend outside a small market on Bridgeport’s Main Street, north of downtown, recoiled at the rules in the new law. “I don’t think it’s right,” said the non-smoker, who identified himself as Shea Bionic. “You should be able to smoke a cigarette outside wherever, right?”

We counted off 25 feet. Even on that very wide sidewalk, it put us in the road, where buses pull up for a stop.

They all agreed the Bridgeport police wouldn’t likely enforce the rule but suburban towns might – selectively, against some people, in their view.

As for all those soon-to-be-banned nicotine breaks in office lounges, on sidewalks, in prisons and on the platforms leading to the doorways of government buildings – all part of cannabis legalization – we will eventually see a culture change, as we did inside restaurants and bars.

Marijuana legalization, as it happens, has become a venue for one of the furthest reaching smoking restrictions Connecticut has ever seen. Another change: Under current law, workplaces with 5 or fewer people are exempt from the no-smoking-in-workplaces rules, but that will end on Oct. 1.

“Through the passage of this law we have taken the next step in restricting areas where the public will be subjected to second-hand smoke,” said Rep. Steve Stafstrom, D-Bridgeport, co-chairman of the Judiciary Committee. “The bottom line is, anyplace that smoking tobacco is illegal, either smoking or vaping cannabis will also be illegal.”

1st legal medical marijuana sales are made in Mississippi