The growing amount of anecdotal and scientific evidence suggesting cannabis can help with anxiety has some people wondering, “Could cannabis also help with Obsessive Compulsive Disorder (OCD)?”

It’s an easy mental leap to make. OCD–an anxiety disorder having to do with excessive orderliness or repeated unwanted thoughts that can be eased by repetitive compulsions–affects 2.2 million people in the United States. It acts on the same parts of the brain that cannabis interacts with–most notably, the CB1 receptors. It’s also associated with feelings of stress, obsessive fixation, and paranoia–all of which can, in many cases, be mitigated by cannabis consumption. In a 97% upvoted Reddit post, over 100 users said they felt cannabis or CBD had provided them with relief from OCD.

RELATED: Veterans with PTSD are struggling. Could cannabis help?

But strangely enough, there isn’t a lot of solid evidence indicating cannabis diminishes the symptoms of OCD. Though some research has been done on the effects of cannabis on OCD patients, most of it has been through either animal studies and anecdotal reports from small trial groups.

And while much of the research is hopeful (one study showed a 60% decrease in compulsions after using cannabis,) the only double-blind, randomized study on the subject showed cannabis had no significant effect on participants suffering from OCD. Additionally, there’s a legitimate fear that THC could heighten paranoia and repetitive thoughts, since it has been known to increase anxiety for certain users.

Case in point, it takes a lot more than a quick Google search to decide if cannabis is right for you if you have OCD. That’s why we took the question to the experts.

According to Dr. Mechoulam, Dr. Vinocur, and Plant Integration Specialist Kathryn Cannon, cannabis has the potential to help people suffering from OCD in two ways:

1. It could be used to compliment SSRI’s

Those with OCD are typically prescribed SSRI’s, but these serotonin-boosting medications can only do so much. Many patients build up a tolerance to them over time, causing them to lose their effectiveness in curbing intrusive and obsessive thoughts. For some, SSRI’s worsen OCD symptoms, or are completely ineffective.

That’s why many in the medical cannabis field see weed as a potential compliment to current treatments for OCD, according to cannabis clinician Leigh Vinocur.

“Of all the anxiety disorders, OCD is a very difficult one to treat,” Vinocur told GreenState. “SSRI’s have been the mainstay treatment, but people often stop responding to them. So, most healthcare providers recommended a multi-faceted approach, with other treatments like cognitive behavioral therapy complimenting the medication. People have been looking into cannabis as one such potential compliment to SSRI’s.”

Vinocur said CBD currently seems to be the preferred cannabinoid for those with OCD since, without the psychoactive effects, it is less likely to induce paranoia and cause OCD to become worse.

“People have been looking into CBD mostly as a potential treatment, because of the non-psychoactive nature of it,” Vinocur said. “Small doses of THC will have a stronger effect and usually won’t make the patient become more anxious, but CBD is safest.”

RELATED: What to do when you’re TOO high

2. It can help with symptom management

Whether or not cannabis can curb intrusive thoughts, many people inhibited by severe OCD use it as a way to cope with them.

23-year-old caregiver Audrey Pickett says weed is what gives her ability to distance herself from obsessive thoughts that would otherwise significantly decrease her quality of life.

“OCD is hard. When I first realized I had it, I’d stay up late to quietly clean and skip school or work just to be alone during the day to clean. I hated it. My roommates hated it. It wasn’t manageable,” Pickett told GreenState. “Then I started smoking while I cleaned, and I noticed I was recognizing when I finished, and I was doing things that actually needed to be done, not just things I saw I could do. I found out I could calm those relentless and repetitive thoughts, and it makes me feel much more present in my life.”

Pickett said she has tried countless anti-depressants to combat her OCD in the past, but has found “nature’s medicine” to be the most helpful when it comes to finding a way to relax.

Plant Medicine Integration Specialist Kathryn Cannon, who works with patients using cannabis for mental health reasons, said this feeling of calm is partly due to the the serotonin-boosting abilities of cannabis.

“When a patient finds a strain that is effective, cannabis can reduce anxiety and stress, allowing people with OCD to have more flexibility with their behaviors and experience a reduction in repetitive thoughts,” Cannon said. “A lot of this is from the impact cannabis has on the chemicals in our brain, such as serotonin.”

RELATED: Is cannabis the key to artistic genius?

As previously mentioned, those with OCD run the risk of experiencing intensified symptoms when using THC. If you are considering using cannabinoids of any kind for OCD, Cannon suggests consulting a healthcare professional first, and having a plan in place in case you experience a panic attack.

“Whenever you are trying a new strain for treatment, make sure you have a plan in place in case symptoms are temporarily exacerbated,” Cannon said. “I recommend trying new treatment methods on a day where your routine is typical, and you have someone with you for support. And, it’s important to speak with your physician about the best course of treatment, and legal options available in your state.” 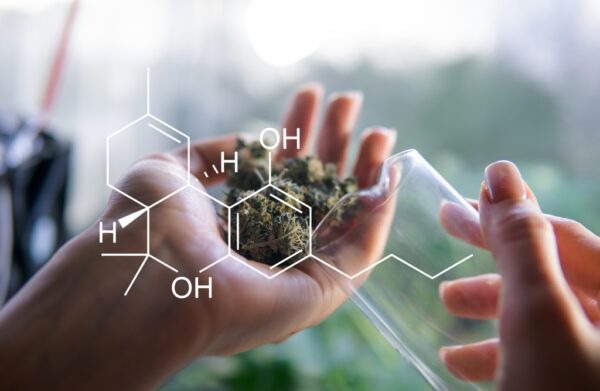