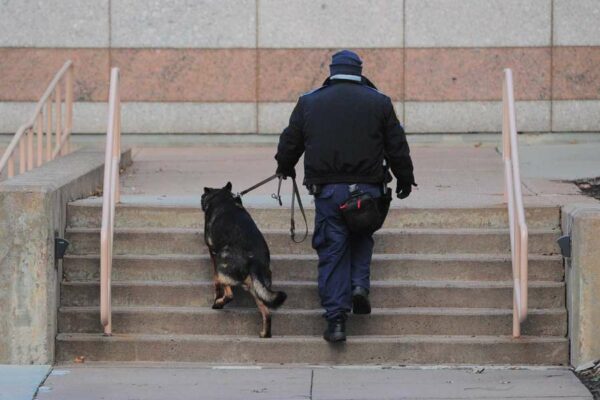 Most, if not all, of the state police dogs trained to smell for weed will retire if Connecticut legalizes recreational marijuana.

Police dogs, a widespread tool in Connecticut law enforcement, have been used for years by local and state police to detect hidden drugs. But with marijuana facing possible legalization, the need would end for those specifically trained to sniff out the drug.

“The potential to have to retire those K-9s is a pretty good possibility,” said Brian Foley, assistant to Connecticut State Police Commissioner James Rovella.

“Obviously, we would look for other avenues and other uses for those K-9s,” Foley said. But it’s not that simple. There are behavioral and legal issues, according to Anthony Guiliano, the sergeant in charge of the Connecticut State Police’s K-9 unit.

“Training a dog to alert to a substance is fairly easy,” Guiliano said, though to train that dog to “unlearn that behavior is significantly more difficult.”

“There’s not necessarily a guarantee that we could ever totally untrain that behavior,” he added.

Legally, a dog that has been trained to recognize a now legal substance presents some difficulties.

When a K-9 alerts their handler that there may be an illegal substance, it “gives them probable cause to enter a vehicle or a dwelling,” Foley said. But if that dog is specifically trained to recognize the smell of a now legal substance, “it ruins the veracity of the dog hit,” he said.

“I don’t know what the dog is thinking,” Guiliano said.

So if, for example, an officer entered a car and found an illegal weapon because a K-9 alerted the handler that a legal substance was inside, the search of the car might be challenged in court.

There are 21 narcotics detection dogs employed by the Connecticut State Police, and Guiliano said about 12 of them are trained in the detection of marijuana and may need to be retired.

But Foley nor Guiliano knew exactly how many pot-sniffing K-9s are employed by local police departments throughout the state. Guiliano estimated the number to be around 50.

“You can assume that there’s a lot of them out there,” Foley said.

There are, however, fewer pot-sniffing dogs working for the Connecticut State Police than there might have been. Foley and Rovella stopped purchasing and training dogs to identify marijuana years ago in anticipation of its eventual legalization. It was a process they began at Hartford’s police department and continued when Rovella took over the state police.

“With the rise in popularity of hemp and hemp products, it began to really lower the veracity of a positive signal from a K-9,” Foley said. “Around that same time, you see the legalization begin to build steam in other states. It was only a matter of time before it came to Connecticut.”

When the dogs retire, Guiliano said they will most likely remain with their handlers.

“When I was a handler, I spent more time with the dog than I did with my wife,” he said.

The Connecticut General Assembly will take up legalization of recreational marijuana in a special session, the date of which has yet to be determined. The state Senate narrowly approved the bill during a closed vote held earlier this week.