In a study guaranteed to get some Americans’ pulse racing, researchers at Stanford University found an association between cannabis use and increased sexual frequency.

Men who smoked pot daily had sex about 1.3 more times per month (6.9 times) than never-users (5.6 times) as well as very infrequent users of cannabis (5.5 times).

Women who smoked pot every day had sex about one more time per month (7.1 times) than never-users (6.0 times) as well as very infrequent users of cannabis (6.0 times). The association between cannabis use and a bump in coital frequency held up over 14 years of tracking more than 50,000 reproductive-aged U.S. men and women, researchers found.

The Journal of Sexual Medicine

An increase in sex frequency is associated the frequency of cannabis use, survey data reveals.

The study will be published in the Journal of Sexual Medicine on Oct. 27 and was conducted by Stanford urology resident Andrew J. Sun, and Stanford assistant professor of urology Michael Eisenberg. The duo performed the study because cannabis use is increasing in America, and prior studies showed “contradictory reports of [cannabis’] enhancement and detriment to sexual functioning.”

Dr. Eisenberg stated in an email that “the results did surprise me. I get asked about this a lot in clinic. I’m an expert in male sexual and reproductive medicine so this comes up. In the past, I’d assumed this exposure would be similar to tobacco cigarettes.

“I think this does not support what we are traditionally taught about marijuana use in urological training.”

The researchers analyzed results in the National Survey on Family Growth, which tracks U.S. men and women age 15 to 44 to gather reliable data on family structures, sex practices and childbearing. Sex is an important source of physical pleasure and an expression of emotional intimacy, researchers note, and studies link sex to overall health as well as cardiovascular health.

Survey answers from 2002, 2006-10 and 2011-15 were analyzed for 22,943 men and 28,176 women who qualified. In all, 24.5 percent of male and 14.5 percent of female survey respondents included in the analysis reported ever using cannabis. The team controlled for potential data confounders like age, marital status, obesity, children, poverty, ethnicity, health, pregnancy and religion — all of which could influence how much sex the respondents were having.

WHY THE INCREASE IN SEX?

The study can’t say pot use causes more sex, just that “the data imply that regular marijuana use will not impair sexual function or desire.” That’s important, because past studies have correlated pot use to erectile dysfunction.

“It’s important to remember that correlation is not causation,” stated Dr. Eisenberg, in an email. “Thus using marijuana will not automatically lead to more sex.”

And researchers can’t say why using cannabis is associated with more frequent sex, but other studies have found that cannabis’ active ingredient (THC) stimulates a part of the brain that turns desire into action. The brain also has receptors that are activated by either THC or sexual activity. In one study, 50 percent of rats injected with the body’s own marijuana molecule called “anandamide” started sexual behavior.

A separate 2016 survey of 289 women at a single ObGyn practice found “the majority of marijuana users before sex reported a better overall sexual experience, an increase in sex drive, a more pleasurable orgasm and a decrease in pain. There was no correlation between sexual difficulties and marijuana use before sex.”

Small amounts of cannabis could increase arousal while larger amounts could decrease it other researchers have found. Historians note cannabis has been listed as an aphrodisiac in medical texts for thousands of years.

“I’m not surprised by the study,” stated Dr. Frank Lucido, a Berkeley physician specialized in cannabinoids. He’s recommended cannabis to treat low libido before and it worked. Cannabis also can treat pain, he said, and “patients who have less back or other pain, may feel more likely to engage in sex.”

Certified clinical sexologist Diana Urman in San Francisco has recommended cannabis to patients with difficulty orgasming, and performance anxiety, “to allow them to feel more connected to their bodies, to feel more relaxed in order to not be in their heads while engaging sexually,” she stated in an email. “Weed use allowed them to achieve orgasm with the greater degree of probability during either solo or partnered sexual encounters, as well as to experience more pleasure and sense of deeper connection within themselves and/or with their partners.”

Berkeley-based certified nurse practitioner Maria Mangini stated in an email that the Stanford study reminded her of a quote: “‘A blue pill for him, a joint for her, and a happy evening for everyone.’ That is astonishingly accurate, IMHO.”

Due to study limitations, the findings don’t necessarily apply to people older than 44 or to homosexual couples.

Survey participants self-reported answers to questions like, “Now please think about the past 4 weeks. How many times have you had sexual intercourse with a woman in the past four weeks?” Self-reports are at risk for recall bias, or exaggeration. The respondents’ partners weren’t surveyed. And penetrative sex was implied. The study also couldn’t speak to how good the sex was, so its “immediate clinical applicability is limited.”

In that 2016 survey of women at an ObGyn clinic, among the respondents who had used pot before sex, 65 percent “believed marijuana made the sexual experience more pleasurable”, while 11 percent believed it did not and 24 percent didn’t know. … Only 4 respondents (3%) believed that [marijuana use before sex] made sex less pleasurable.”

POT USE ON THE RISE

Cannabis use is increasing in America, with 13 percent of the U.S. population estimated to be using the botanical in 2016, versus 7 percent in 2013. Eight states and Washington D.C. have legalized cannabis for adults 21 and over. Twenty-nine states have medical cannabis laws. A Gallup poll released this week found a record 64 percent of Americans supported legalization.

Cannabis remains federally illegal, and U.S. officials rank it at the top of the list of the world’s most dangerous, medically useless drugs. Many doctors and associations dispute that claim. For example, Stanford researchers note the medical literature finds that smoking pot for 20 years or more either improved or had minimal impact on lung function. Other data suggest cannabis use is associated with lower risk of diabetes, and obesity.

“Given the association of marijuana with favorable health profiles, one could surmise no impact or even benefit from marijuana use on sexual function,” the Stanford researchers wrote.

There are harms to using cannabis, however, they said. One study found male pot users had lower sperm counts. And clinicians are worried about an increase in pregnant women using cannabis.

Urman also cautioned that “weed may impede our abilities to discern and evaluate risk factors associated with: higher risk of contracting STI’s; crossing ethical boundaries; as well as increase of consumption of alcohol or other harmful substances.”

How has cannabis’ affected your love life? Let us know on our Facebook page. 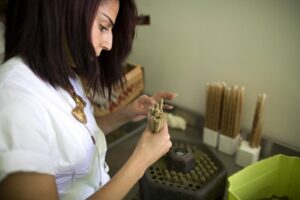