SPRINGFIELD – More than a year after new marijuana dispensary licenses were scheduled to be distributed, Gov. J.B. Pritzker’s office on Thursday announced the initial lottery – and two new ones – will happen by the end of August.

The state also announced the award of more than 200 other licenses for craft growing and infusing operations as well as distribution, and the governor signed into law the measure that will allow for the two new lotteries.

“In addition to signing that legislation, we’re actually issuing 200 craft grower (and other) licenses across the state and about 67 percent of those are going to people of color,” Pritzker said. “And so there will be people getting into business in the cannabis industry, nearly right away, and I’m very pleased about that.”

The newly signed bill, House Bill 1443, was an effort to jumpstart the equity measures in the 2019 law that aimed to diversify the largely white, male-dominated legal marijuana industry.

Per the initial law, 75 dispensary licenses were to have been distributed over one year ago. But of the 900-plus applicants for those licenses, only 21 achieved the perfect score necessary to be entered into the final lottery. That caused the governor’s office to pause the final lottery amid backlash from equity advocates.

That lottery will now be held Aug. 19 with all 21 finalists eligible to win licenses.

While the initial lottery allowed only applicants that were tied for the highest score to reach the lottery, the new lotteries will instead apply to those who received 85 percent or more on their 250-point application.

The first new lottery for 55 licenses includes any firm that scored at least an 85 percent on its initial application that has not hit a 10-license limit. That lottery will be held July 29.

The second new batch of 55 licenses would be available to firms that scored 85 percent or higher that also have at least 51 percent ownership meeting social equity requirements, including living in an area impacted by the war on drugs for at least 10 years, having been arrested or convicted of a marijuana crime eligible for expungement, or being a member of a family impacted by the war on drugs.

That lottery is scheduled for Aug. 5.

“Almost all states that have legalized cannabis have done so in a way that produced a multi-billion-dollar industry dominated by a handful of corporations and individuals that lack diversity. But Illinois is attempting to produce a cannabis industry that actually looks like Illinois,” Toi Hutchinson, Pritzker’s marijuana advisor, said in a news release. “What we’re attempting to accomplish is hard to do and takes time to accomplish, but we have an obligation to ensure that it gets as strong a start as possible.”

The lotteries for all marijuana-related licenses will be managed by the Illinois Lottery and drawn by a randomized computer process.

The governor’s office also announced Thursday that the Illinois Department of Agriculture has reached out to 213 winners of other marijuana-related licenses. Those include 40 craft grow licenses – a grow operation with a smaller footprint than the massive cultivation centers – as well as 32 licenses for infusing other products such as foods or oils with marijuana and another 141 licenses to transport marijuana products.

While applicants for those licenses were not required to report their gender or race information to the state, the governor’s office said 80 percent of the applicants “self-reported” their demographic information, and 98 applicants reported being Black-owned, 19 Latino and 34 Black woman-owned.

Upon acceptance of the licenses and payment of fees, the winners will be made public.

The original legalization law also allowed up to eight community colleges to receive licenses to develop a curriculum to train students in marijuana related fields. The new law signed Thursday removes that cap.

The state’s Department of Commerce and Economic Opportunity also has partnered with two private lenders to create a loan program for social equity applicants that makes available up to $100,000 for a transporter license applicant, $500,000 for a dispensing organization or infuser and $1 million for a cultivator. Information can be found on DCEO’s website. 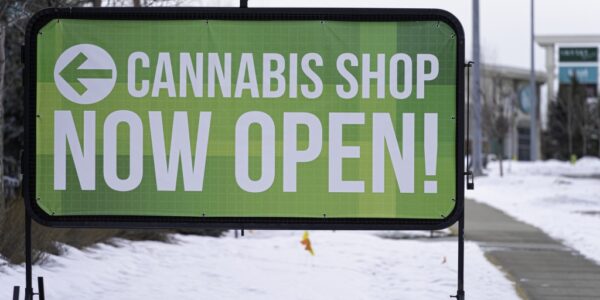