US Virgin Islands authorizes recreational use of marijuana

SAN JUAN, Puerto Rico (AP) – The U.S. Virgin Islands has authorized the recreational and sacramental use of marijuana for anyone 21 and older, joining several nations across the socially conservative Caribbean that have relaxed their cannabis laws.

The move has been several years in the making, with U.S. Virgin Islands officials traveling to Colorado to meet with cultivators, manufacturers, law enforcement and others to learn about the industry before Gov. Albert Bryan Jr. signed the bill Wednesday.

“We are bringing the opportunities to you, but you must also do your part to seize these opportunities,” Bryan said, referring to the cultivation, manufacture and sale of marijuana in the U.S. territory.

Bryan added that his administration will expunge the records of those convicted of simple cannabis possession if they are eligible, saying that some 300 people in the U.S. territory of 105,000 inhabitants have been convicted in the last 20 years.

“It is my goal to make sure many of us who have been negatively impacted by the criminalization of cannabis are afforded every opportunity to participate in this new and legal cannabis industry,” he said, adding that the government will provide entrepreneurship and job training.

The U.S. Virgin Islands previously approved marijuana for medicinal use in 2019.

The new law allows those 21 and older to possess up to 2 ounces of marijuana, a half ounce of concentrate and 1 ounce of products such as edibles for recreational, sacramental and other uses.

Medical marijuana patients are allowed to possess up to 4 ounces of cannabis, 1 ounce of concentrate and 2 ounces of products.

Under the new measure, cultivation permits will be awarded to those who use marijuana for sacramental purposes.

Dispensaries will apply a tax of at least 18% on all sales, although medical marijuana patients are exempt, according to the newly approved law.

Three-fourths of the tax revenue will go to the general fund. Of that amount, 15% is earmarked for behavioral health programs, 5% to address homelessness, and 5% for youth programs

It wasn’t immediately clear when the regulations of the newly approved industry would be in place. The Office of Cannabis Regulations, which was created a year ago and held public hearings last year on proposed rules and regulations, could not be immediately reached for comment.

The bill states that the office will start issuing applications for licenses and permits within a year of the promulgation of the rules and regulations.

The law notes that the “closed economies” of the three islands that make up the U.S. Virgin Islands have limited economic opportunities for its people, “many of whom have been impacted by the prior prohibitions on cultivation, possession and sale of cannabis.” It also said it was appropriate to recognize certain cultural and sacramental uses of it. 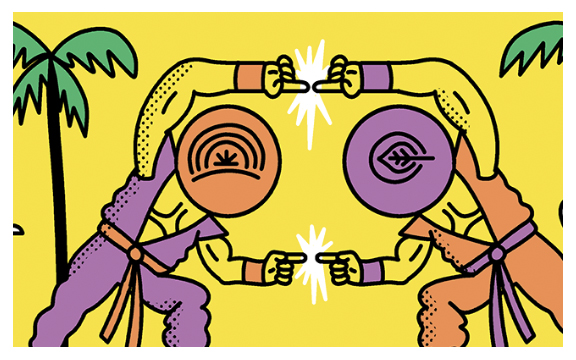