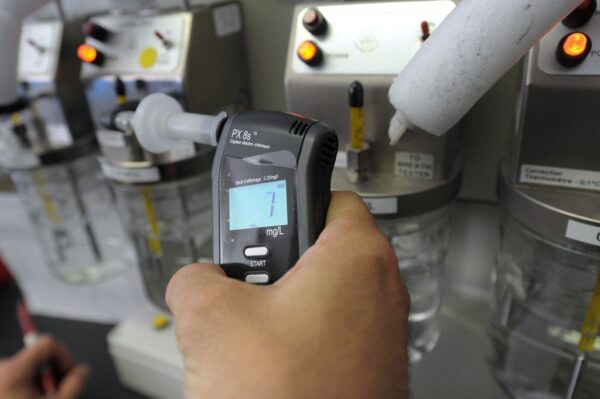 A team of researchers in Pittsburgh have invented a small, boxlike device that fulfills the same function as a Breathalyzer, except for pot instead of alcohol. It works by detecting THC (delta-9-tetrahydrocannabinol), the main psychoactive compound in cannabis, on the user’s breath.

“Nanotechnology sensors can detect THC at levels comparable to or better than mass spectrometry, which is considered the gold standard for THC detection,” reads the official release from Swanson School of Engineering at the University of Pittsburgh.

The engineers behind the project started to develop the device in 2016, as use of weed was becoming legal in an increasing number of states — presumably with the intention of the device then being used by law enforcement to ensure safe and moderate consumption.

THC IMPACTS PEOPLE DIFFERENTLY: Does this mean legal limits for cannabis-impaired driving may be impossible?

“If we have a suitable industrial partner, then the device by itself would be quite ready in a few months,” Alexander Star, a chemistry professor and the head of the Star Lab at Swanson, told NPR.

However, the accuracy of such a device remains untested, partly because marijuana DUIs are still relatively new, legally speaking (it took lawmakers decades to formalize drink-driving limits).

Additionally, computer engineering professor Ervin Sejdic, who worked on the device with Star, says that at present, the correlation between THC levels in a user’s blood and how stoned they actually are is “basically missing, from a scientific point of view.”

STONED DRIVING: Why the hype makes no sense

Sejdic adds that further scientific inquiry in this area is required in order to help courts determine what constitutes an “unsafe” level of pot use, but that study is also subject to the permission of the DEA, the acquisition of which isn’t exactly easy.

“It’s a kind of both ethical and legal issue,” he says. “Given that the marijuana is still a Schedule I substance, it’s difficult to actually carry out any research related to this substance… I think there will be some push even for the federal government to actually allow researchers to look and correlate these levels of smoking and impairment.”