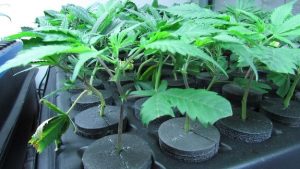 Marijuana clones are cannabis starter plants
Idiot’s Guides’ ‘Growing Marijuana author Kevin Oliver explains how to select clones for your 2017 garden!
How do I shop for clones?
Shopping for marijuana clones can be as easy as driving up to a farmers market or retail store in some of the states where marijuana is legal for medical or recreational adult use. In those cases, you can often get informed advice on the type of strains available as well as references about the grower. In other, less sophisticated markets, Craigslist has been known to offer ads for purveyors of marijuana clones. And, in some states, it really just depends on whether or not you can find yourself a dependable grower to obtain some healthy clones from.
What are clones?
Clones are basically the cuttings from a plant that have been propagated to the point of an independent, established root system. When a clone, or ‘cutting’, re-roots itself and grows to maturity, it perpetuates the genetic blend, or the phenotype, of the plant from which it came, guaranteeing consistency over time.

Where are clones sold in legal and medical marijuana states?
Clones can be found at marijuana Farmers Markets in municipalities that allow for either recreational or medical marijuana use. Many medical marijuana dispensaries and some retail adult use stores also offer clones.
In some states that allow medical and/or recreational marijuana sales, co-operative gardens and farms are allowed to either sell or gift clones to patients or adults, depending on the law. Check your local laws here: www.NORML.org/laws.
Eight states and the District of Columbia have legalized marijuana for adult use, including; Washington, Colorado, Oregon, Alaska, California, Nevada, New Hampshire and Maine.
Additionally twenty-three states have enacted medical marijuana laws since 1996; Alaska, Arizona, California, Colorado, Connecticut, Delaware, Hawaii, Illinois, Maine, Maryland, Massachusetts, Michigan, Minnesota, Montana, Nevada, New Hampshire, New Jersey, New Mexico, New York, Oregon, Rhode Island, Vermont, Washington and the District of Columbia have passed laws providing for limited legal protections from arrest for authorized patients who use cannabis with a doctor’s recommendation.
How do I know I’m buying good clones?
Word of mouth and personal references are always a good way to get recommendations for reputable purveyors of reliable clones. Though every grower will tell you that they have the best strains, it is really up to others to make that determination. Often times, budtenders at dispensaries or adult use retail stores can provide good feedback and strain advice.
Some growers also compete for awards and recommendations at events such as; the High Times Cannabis Cup, DOPE Industry Magazine Awards, Terpene Tournaments, or farmers markets as your local law allows.
What do good ones look like?
A good clone is generally several inches tall with an established root system to feed a plant with several green, healthy leaves. The larger and healthier a clone is, the higher its chance of survival and the sooner you will be able to take additional clones from it.
What do bad ones look like?
A bad clone simply will not look like a healthy plant. A few signs to look for are yellowing leaves, a weak stem or small leaves that are not fully developed. A clone can be unhealthy for several reasons, including a root system that is not well established or because of an infestation of pests or disease.
What do cannabis clones usually cost?
An average clone price in a regulated recreational or medical marijuana market will generally go for around ten dollars, give or take a few bucks. The price may be a little higher based on the size and health of the clone as well as the supply and demand of the strain.
Why buy cannabis clones instead of seeds?
Cloning insures a genetic consistency that seeds do not. You will want to choose clones over seeds in order to maintain the specific phenotype of a desired genetic blend – into perpetuity. I have always liked to clone for consistency, whether it was my small medical garden in the past or the 30,000 square foot canopy l currently own and farm with my wife.
It’s been over a decade since I was fortunate enough to be introduced to growers who consistently grew strains of marijuana which I truly enjoyed time and time again. After being gifted small plant starts, or clones, that had been rooted from the plants I liked, I have been able to maintain the original genetics and continue to enjoy the same plants today.
[GreenState cultivation columnist Kevin Oliver is the co-author of “Idiot’s Guides: Growing Marijuana” (Alpha, 2016). Oliver is also the Founder/CSO, of Washington’s Finest Cannabis (A WSLCB Licensed Marijuana Business). Oliver is on the Board of Directors for NORML, the Executive Director of WANORML/WANORML PAC — The Washington Affiliate of the National Organization for the Reform of Marijuana Laws.]

Copy and paste this URL into your WordPress site to embed

Copy and paste this code into your site to embed