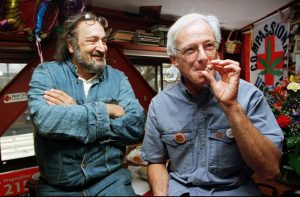 FILE – In this Nov. 6, 1996 file photo, Dennis Peron, leader of the campaign for Proposition 215 and founder of the Cannabis Buyers Club, right, smokes a marijuana cigarette next to Jack Herer, of Los Angeles, in San Francisco. Peron, an activist who was among the first people to argue for the benefits of marijuana for AIDS patients and helped legalize medical pot in California, died Saturday, Jan. 27, 2018, at 72. Peron was a driving force behind a San Francisco ordinance allowing medical marijuana  a move that later aided the 1996 passage of Proposition 215 that legalized medical use in the entire state. (AP Photo/Andy Kuno, File)