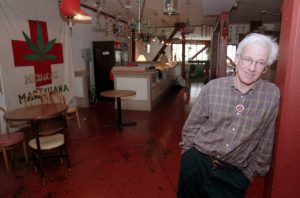 Dennis Peron at the San Francisco Cannabis Cultivators Club, Jan. 10, 1997. Peron, who openly dealt pot from his supermarket on Castro Street in San Francisco during the 1970s before leading a successful campaign to legalize medical marijuana in California two decades later, died Jan. 27, 2018, at a hospital in the city. He was 71. (Jim Wilson/The New York Times)