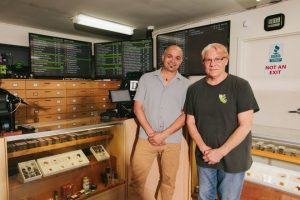 Sue Gardea
Age: 62
Residence: Berkeley
Employer: Berkeley Patients Group
How did you end up working in the cannabis industry? “I thought this would be a perfect place to come to because I wouldn’t get drug-tested. I’d been smoking cannabis for years. (Laughs.) At the time my son’s friend worked here, but instead of my son, I came and applied.”
What does your family think? “I haven’t told my mom still. I told her that I work at a medical facility.”

Alan Clark
Age: 52
Residence: Oakland
Employer: Berkeley Patients Group
What have you learned on the job? “About six months ago, I had a guy come in and he said that his mom had passed away that week. She’d been suffering from dementia. ‘You gave me CBD stuff and I don’t know if that’s what it was, but she seemed to be calmer, able to eat and had these moments of incredible clarity,’ he said. ‘We had three or four conversations during the last month of her life. I had to believe that what you gave me helped her get there. I had to come in and tell you.’ Two days later another guy came in and told me the exact same story.”